To all those who believe loving your enemy means allowing the enemy to destroy our civilization ...

Note that there is a concept of "enemy". It doesn't say "do not have enemies". It means that when you vanquish your enemy, you don't be cruel to them. But they still are (or were) enemies and they still do (or did) need to be defeated. Your enemy is those who would create injustice in the world (such as Saddam ordering the rape of Iraqi women). Your enemy needs to be vanquished. Once vanquished, your enemy should face justice, not cruelty. At the end of the day, your enemy is a natural animal reacting to his environment according to his genes and his imperfect logic skills and is not evil. His genes have evolved to be a subjugator etc and it requires careful conditioning if you want to stop the effect of that genetic programming.

Bottom line - DO NOT ALLOW INJUSTICE IF YOU CAN REASONABLY PREVENT IT.

Norway's population is 4.7 million compared to the US's 300 million. That makes the approx 84 dead in the shooting spree equivalent to 5362 Americans, ie nearly twice as big a terrorist attack as happened to the US.

Regarding changing policy to cater for the views of a white Christian Norwegian - forget it. There's too many people with conflicting demands. You can't give in to the first or last to commit a terrorist act. You should define your policy according to the golden rule and science. ie the government should be rational and humanist.

And as for the complete failure of the Christian religion to turn this guy into a protector of humans rather than a murderer of humans - well that whole wishy-washy religion should be abandoned in favour of something like Mu'tazilah which teaches a strong ethos of using your brain to protect humans - nothing left for "interpretation" (ie spinning to suit your purpose).

The most tragic aspect of the whole thing is that Australia's longstanding proud record set by Martin Bryant has been smashed. 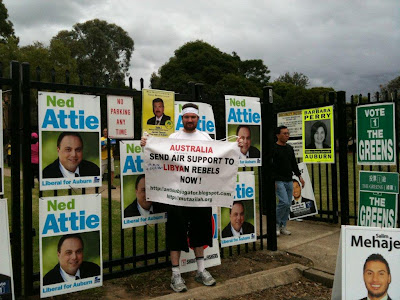 There are now discussions about whether any US troops should remain beyond the end of the year. I say NO WAY.

The poor Libyans are required (the price of getting China and Russia to abstain) to fight for their freedom with inferior equipment to the enemy, and "just" air support. Compare that to what the Iraqis have and it's a complete joke. The ONLY thing that Iraq NEEDS is aircraft to put down a coup attempt by Sadr loyalists etc. And such air support only needs to come out very rarely, probably never, and can come from Kuwait.

It is far more important that the US sticks by the only date for full withdrawal that it ever agreed to. It will make the political argument easier if the US never did anything wrong. Yes, I know a mutually-agreed extension isn't technically wrong, but so many people think that the Iraqi government are puppets and the US has its troops there still to control them, that it's better to just yank that rug from underneath them, given that it doesn't matter anyway - they are NOT needed.

In the worst case scenario that there is a military coup or something that the US won't put down with troops out of Iraq, but would have if they had remained there, well, that's just bad luck. Iraq isn't nearly as important in 2011 as it was in 2003. We already know that Arab Muslims can run a democracy. We know exactly what that democracy looks like. We know what the people innately want. We know where the divisions are. And guess what? We've got new Arab Muslim democracies waiting in the wings (ie Tunisia and Libya) which are likely to be more successful than Iraq's, because they don't have the ethnic and religious divisions. Iraq was far more interesting in 2003 than the other 2, as we could see how they would politically resolve the religious differences (similar religious differences caused 9/11). We now know the answer - they didn't resolve them. The religious bigotry is still there, and the potential for further anti-non-Muslim violence exists while ever this religious bigotry remains. Expunging that requires more time and/or more direct culture changing.

I know that soldiers don't want to feel they died for nothing. They didn't. The Middle East needed to be shaken up after 9/11, and by joves, it has been shaken up. With 300+ political parties in Iraq alone, and emerging democracies elsewhere, and inherent sectarian tensions laid bare for scrutiny, it has been shaken up. Progress in the rest of the Middle East may feed back into Iraq too. ie if Tunisia has a working democracy, then if we end up with an Al Sadr dictatorship, the Iraqis will have something better to aspire to, and a quick war can be done at any time to restore Iraq's democracy. This time the old security forces should not be disbanded. And this time the Iraqis will hopefully not be voting for religious parties. Maybe we can even force the Iraqis to abandon the religious bigotry in their constitution that says that Iraq is a member of the Muslim world, and drop the racist reference to being a member of the Arab world too. I see that we have a lot more room for manouvre now.

There is something inherently wrong with self-defence. While it is indeed a right, the problem is that the victim only gets justice if they are strong enough to defend themselves and win the fight with the aggressor. Therefore as a civilization we need to ensure that no individual or country ever needs to defend themselves. That even if a victim does nothing, the collective will react to the violation and bring justice.

If the world was only comprised of innocent liberal democracies, then the UN would be an appropriate body to defend the rights of the individual country. This has a direct analogy in the playground where a bully may victimize an innocent person and a stronger force is called upon to hopefully bring justice.

I deal with these analogies a lot. Individual countries are just groups rather than individuals and you can usually draw a conclusion about how a collection of countries behave and then apply those rules to individuals within a country. Or vice-versa.

I believe the reason people are drawing different conclusions is that they look at countries as a complete entity with the head of state as its legitimate representative. But I instead see a dictator as representing only 5% or whatever as the population, and treat that as an entity, and treat the other 95% as a different entity, and the one that is the victim of oppression. In a democracy you have 51% who voted for the leader, with most of the other 49% supporting the legitimacy of that leader's rule and strongly opposed to any attack upon him.

Here is an example of a people who can recognize reality and are somewhat willing to do what is necessary to genuinely solve their problems. Unfortunately the political system is unlikely to allow replacing the entrenched locals and return to British colonial rule. But it would be good if Jamaica and the rest of the world could be run as close to the highest standards as possible.