We are all Chinese

20 years ago today, the biggest (*) tragedy of my lifetime, and possibly in world history, occurred.

1 billion people were on the verge of freedom and human rights as the security forces who were ordered to kill them refused to run their tanks over children who wanted to be free.

The flame of freedom remains in China, as the article in the Chengdu Evening News with the phrase "Paying tribute to the strongwilled mothers of June 4 victims" shows. 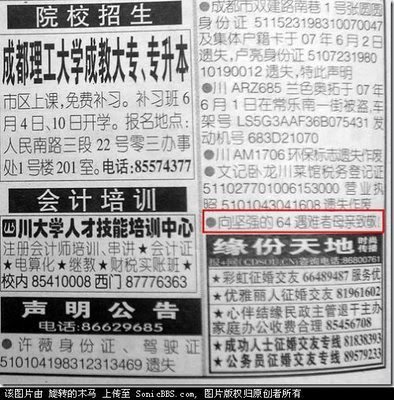 Just because the dictatorship doesn't allow them visibility, doesn't mean they're not there. We know you're there. I saw you in Iraq long before March 2003 gave you some media access so that we could see the long queues you would form trying to join the new security forces, despite the carnage of the previous day's queue. I see you gathering in crowds in Taiwan, speaking truth to power. I see you standing along the 38th parallel with your head held high and your heart full of liberty as you scan north for any sign of fascists (aka communists) that may try to snatch that precious gift away from you.

On 1989-06-04, we were all Chinese. And we literally cried for our sons and daughters being brutally crushed by fascists (aka communists).

Here is what the world should have looked like on the 5th June: 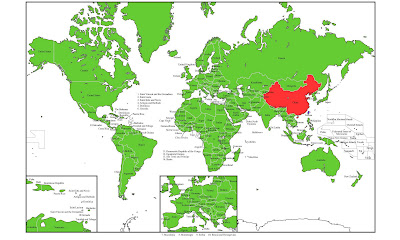 The green shows all the members of NATO who are willing to stand up for the freedom of others. The blue shows a NATO protectorate (Taiwan). And the red shows the remaining pocket of tyranny where the dictator simply has too much weaponry to take on head on and we need to fight a Cold War to free our sons and daughters instead.

On this 20th anniversary, as a tribute to the freedom fighters who literally faced down tanks for freedom - something most people in free countries only read about in comic books, I released the culmination of 50% of my life's work (the other 50% was dedicated to trying to obtain freedom for the remaining slaves/subjugated peoples of the world - including but not limited to the Chinese people). Also an approximately 20 year dream to have a lingua franca for computers by porting the free GCC C compiler that was available for other platforms, so that everyone everywhere could use C if they wished to.

MVS was always the exception, and today, for the first time in human history, we have a free C90-compliant (without caveats) compiler on basically every major computer platform in the world. Yes, even MVS (aka z/OS), which had always been an exception before.

So my Chinese brothers and sisters - on this day please know that I am thinking of you. You are not alone. I yearn for your freedom too. In fact, I yearn for it every day, because every day I imagine how I would feel if I were living there and didn't have freedom of speech. I do this via a simple derivation of the Golden Rule, which is in the bible. For some reason the Chinese dictatorship doesn't seem to see the Christian religion as a threat to its grip on power. But at any time, the Chinese military may adopt Christianity, and do the same simple derivation of the Golden Rule, and choose to free the Chinese people instead of subjugating them. My own religion is nothing more than an extensive derivation of the spirit of the bible, after all.

By the way, porting compilers and writing operating systems takes a lot of work, which explains my extended absences. It's more productive to be doing that than arguing the toss over whether liberating millions of people is a good thing or a bad thing.


(*) while there are other big tragedies like 9/11 and the Holocaust, this one involved 1 billion people, so the stakes were the largest.