Military bases in friendly dictatorships like Bahrain are a means to an end, not the actual end. The actual end is worldwide liberal democracy. There is no evidence that the people of Bahrain are nasty like the Saudis, where democracy would mean the empowering of an enemy. Bahrainis are more likely to be neutral, and probably won't accept US bases on their soil, but aren't actually wanting to harm the free world.

If we were facing an existential threat, I'd sell out the Bahraini people. But we're not. Losing the Bahraini base will only be an annoyance. The free world is ridiculously strong at the moment, and the actual problem is lack of political will to go to Iran, not the lack of a suitable base to do it from. As they say - use it or lose it. Time to lose it.

I'd rather reinvade Iraq to get access to Iran than sell out the Bahraini freedom fighters.

If we were initiating the liberations ourselves, then of course the obvious sequence is to start with enemy countries first. But you have to deal with the world as it is, not how you would like it to be. And the fact is that some allied dictators have populations that have started revolutions, and we will be on the wrong side of the War on Terror if we fail to support their aspirations for freedom. Show trials are a slap in the face of the free world.

Note that free Libya is something that has greatly strengthened the free world. We may actually have a candidate for NATO membership there. It should be a successful liberal democracy. And because of this, Iraq is not so important anymore. Iraq will be a less successful democracy.

Yemen has more scope for militarily supporting the revolutionaries, as I don't think there's an actual base there. It's very bad form to invade a country you're already a guest of (as is the case in Bahrain). So the first thing to do is to cease being a guest. China was similarly condemned after the Tiananmen Square massacre. Time to do the same with Bahrain and Yemen. As painful as it is to see these nation-states cease to be allied, it needs to be done. The goal of worldwide liberal democracy means that dictators need to be abandoned eventually. The time has come prematurely for a couple of them.

Note that I am constantly reevaluating the world. A couple of months ago I would not have been so bold to say "give up the Bahraini base", because it was still unclear what was going to happen in Libya. But with Libya entering the free world we have a stronger base in the global ideological war. 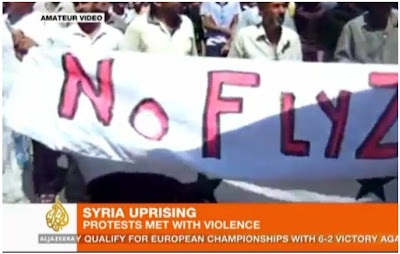 There was an article on Strategypage which I answered but the answer got lost, so I'm just posting it here instead. The article basically says that Afghanistan shouldn't be used as a model. But I'm a big fan of the Afghan model and believe it should be the basis of future warfare. Here's what I had to say:

I disagree with this article. Depending on what your military objective is, the Afghan model has worked brilliantly. A couple of points are made clear:

1. Modern wars are won in the air, no matter how much soldiers hate to hear that.

2. Modern wars are wars of liberation, not conquest.

There has been an additional fact in Afghanistan and Iraq (but not Libya) - the US has desired (for good reasons) to do nation-building. But nation-building was always optional. If you just want to get rid of an enemy government, it is sufficient to provide arms to some locals and then usher them to victory from the air. As was done in Libya. It was always possible to do a Libya, just no-one had ever tried it until now. Afghanistan was even easier than Libya - they already had a military in place that was able to hold out against the Taliban (although they were in the process of losing). In Iraq, no-one actually attempted to do it Libyan-style. There was no shortage of brave Shia willing to form long queues to join the new Iraqi security forces. They were always there. The US would have had to artificially create a liberated city, because unlike Libya and Afghanistan there weren't pre-existing liberated areas. But assuming Basrah was liberated by coalition paratroopers, a local Iraqi army could have been created which would have been able to knock over Saddam's military.

Note that I'm only talking about knocking over the enemy military (regime change), not nation-building.

Assuming you're willing to agree that regime change is possible using locals (Libya being the best example of that), the next step is nation-building. Libya is also about to demonstrate that it is possible to build a nation without foreign troops. Was it a mistake to do nation-building in Afghanistan and Iraq? No. These were two important countries. We needed to see if they could be built along western lines, as at the time these countries were great unknowns, and it was time to try a "western experiment" on them. These places have tried every experiment known to man EXCEPT secular capitalist liberal democracy and it was important to create institutions along western lines and then protect those institutions to ensure that they "worked", and then see if the whole thing became self-managing.

"1. There were too few ground troops in Iraq to control the country after the destruction of Saddams security apparatus."

The thing is - it was not the goal to control the country. The goal was to ensure that the country was uncontrolled to see what the Iraqi people would innately choose if there was no-one controlling them (ie neither Saddam nor the US). They were allowed to experiment with "Sunni fundamentalism" in Fallujah, and all reports were that that sucked really badly. They were allowed to experiment with "Shia fundamentalism" in Najaf and it turned out that Sistani didn't like having his favourite mosque trashed and issued a call to the Shia to just join the new security forces instead of following an idiot like Al Sadr.

"2. There were and there are still too few ground troops in Afghanistan."

Perhaps the Taliban insurgency will take longer to put down with fewer ground troops. However, the Afghan government with it's 164,000 ANA troops is undefeatable. With air support added, even 10,000 Northern Alliance troops were enough to beat the Taliban (which had heavy weaponry at the time). 164k is a walk in the park. No foreigners required. If you want proof of that, just try it. Don't get me wrong - I have no problem with the US making it easier for the ANA to win, but they will win regardless.

"3. Libya could have greatly used real Nato ground troops, probably the War would have ended a day after Nato armor raced into Tripolis. Since there were obviously almost no defenders there, they could have landed directly in the harbour, which the Rebels could not."

Absolutely. We could have had the war over in a week instead of 6 months. However, then we would have lost the real life data point of just how much can be achieved just by providing air power to a local population. And given that they weren't keen on seeing NATO ground troops anyway, that was the appropriate path to follow. Wars are won in the air, and for whatever reason they don't consider foreign air support to be humiliating, despite the fact that that in reality means that it was NATO who won the war. The ground forces are just photogenic.

"How on earth can anyone derive from this facts that we need LESS ground troops is beyond me."

It's even more pronounced than that. In the case of a country like Syria with conscription, you have an entire population that has military training. What you can do is directly fly in tanks and jump-start a one-sided civil war. You need enough troops to take over a Syrian airport and that's about it. I can understand why you would doubt this would work - because you've never seen it tried. That's why I would advocate doing Syria in this manner (taking over an airport) to give a deeper understanding of military options if nothing else. Best to get all the data points you require BEFORE we start massively reducing the number of ground troops.