As you are aware, the Syrian people have been demonstrating to express their desire for freedom. It should always have been obvious that these people were there desiring freedom, and that their opinion was being suppressed by their dictator. But now the people have taken the extraordinary step of demonstrating in the streets of the dictatorship, at great personal risk to themselves.

Today I saw the protesters carrying some signs in English. One said "SOS" and the other said "HELP". Help, as in, "foreign aid". I am asking the Italian military to provide that foreign aid. It is a once-off cost, unlike the foreign aid you probably give every year to be squandered in Africa. Can you imagine what was going through the mind of the people writing that sign "HELP"? I can imagine their frustration that they can do nothing about their situation and that they were forced to beg for help. They know they need international help so they wrote in English. They were probably thinking "will anyone even see this?". But they would have reasoned that they should at least try. Even worse they would have reasoned "will anyone care about us?". For some reason images of starving Africans are enough to pull heartstrings of foreigners, but Arabs being held in state-slavery are not photogenic. But they would have again reasoned that they can at least try their best. That's all anyone can do, really. If everyone tried their best, we'd have a very different world.

So Mr Berlusconi, I now wish to do my best. I know there are western militaries that are capable of doing this job. I know that you are one of them, and I know that you haven't taken the political or military lead for any recent liberation. As a citizen of a democracy with freedom of speech, basically the best that I can do is to use that freedom of speech to lobby the people in power to do the right thing. So that is why I am writing this letter to you.

For a specific strategy I would suggest you repeat what has been done in Libya. The regime has been overwhelmed in certain cities to the point where it feels the need to use tanks. Those tanks can be destroyed from the air. Syria has a conscript army, and most Syrian males should have military experience. So a rebel army can be constructed from that. They will need to have heavy weaponry supplied to them. The war won't be as quick and clean as if professional Italian soldiers were to go in on the ground, but you need to deal with cultural realities. A large percentage of Arabs find foreign ground troops to be humiliating. It's easier for them to stomach the increased loss of life. In the long run, it is probably better to do it their way - although it should be noted that we are necessarily working with imperfect information. But the moment really needs to be seized. It is right now that people are out on the streets, so it is right now that they should be provided the necessary air support. The Gaddafi spokesman (Moussa Ibrahim) correctly pointed out that the Libyan rebels wouldn't have been able to advance 1 metre if it wasn't for NATO air cover.

Another thing. You will not be able to get UN approval for this action. The fact that the UN approved the Libyan action was nothing short of miraculous. For cultural reasons the Russians and Chinese will not agree to the use of force. So I ask you to give your loyalty to the man holding the "HELP" sign, rather than being loyal to a couple of countries who see nothing wrong with state-slavery.

And one more point. There may well be sectarian violence in the transition to majority rule. This is something innate in Syria and you are not responsible for that once-off cost. The cost needs to be paid at some point in time - you can't justify keeping people living in slavery indefinitely because there's a cost of war waiting to be paid. It's more important to ensure that the man with the "HELP" sign isn't rounded up and locked in jail for the rest of his life. The sooner the cost is paid, the sooner the horror of people living in state-slavery will be brought to an end. This is the target of opportunity. 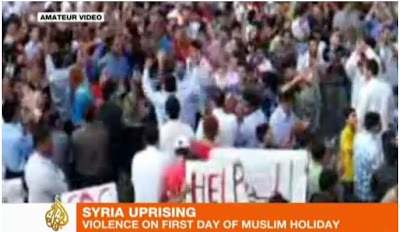